Adam Aptowitzer is a tax lawyer with special expertise in the law as it pertains to charities, not-for-profit organizations, and other non-taxable entities anywhere in Canada. His practice involves tax litigation for private taxpayers and charities and he has represented clients at the Tax Court of Canada, the Federal Court of Appeal and the Supreme Court of Canada.

Adam’s practice is diverse and includes (amongst other areas) high level tax planning for charities engaged in business activities, operating overseas, corporate governance and gift planning. He also works with international organizations seeking to work in Canada or with Canadian organizations operating abroad.

Moreover, Adam provides consultancy services to foreign governments on their Civil Society Regulations and compliance with FATF R8. And, as counsel to the Canadian Blockchain Association, provides legal advice to Canadian and foreign entities interested in the Canadian perspective on crypto-currency regulation.

Adam contributes to the public policy debate through his academic papers and expert witness testimony to Government. He regularly publishes in several journals, including the Canadian Taxpayer and the Not for Profit News. He is also often cited as an expert on the topic of charity law by the popular media, and has authored a book called ‘Starting and Maintaining a Charity in Canada’.

In 2012 Adam was named the Heather McArthur Memorial Young Lawyer Award winner by the Ontario Bar Association recognizing his contributions to legal education and law reform. He was also named to the Top 40 Under 40 by the Ottawa Business Journal and Ottawa Chamber of Commerce.

In addition to his legal practice, Adam is an Associate Professor of Law at the University of Ottawa and has been called to the Bars of both Ontario and Alberta.

Adam has been recognized as among the premier Charity Law lawyers in Canada by the Canadian Lexpert® Legal Directory.

Call to the Bar

Adam can be reached at: adamapt@drache.ca.

He can also be reached at any of the following numbers at extension 12: 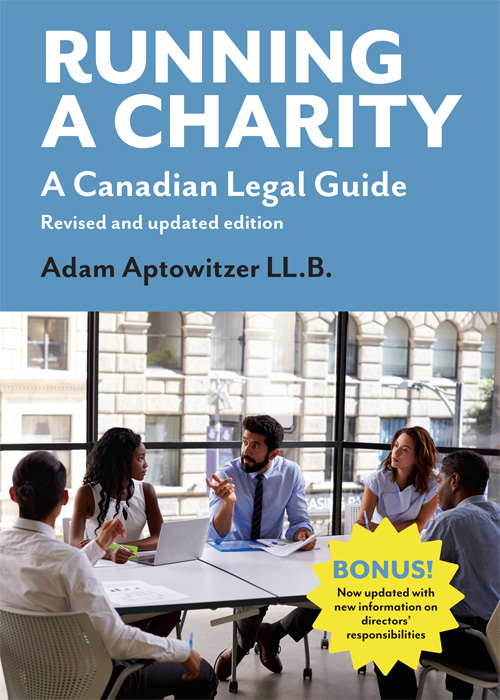 A little bit about Adam…

Adam Aptowitzer practices in the areas of charity and tax law. He is a member of both the bars of Alberta and Ontario and has been writing and speaking on the topic of charity law for several years.